Why I switched from Mandrill to Sendgrid (and other alternatives)

Recently Mandrill (MailChimp) really let the developer community down by announcing the demise of their stand-alone transactional email service, Mandrill. This left me and many other developers with a decision to either find something new or pay a ridiculously high monthly fee to keep our apps' small amount of email flowing. Here's the breakdown of the change and why I'm switching to Sendgrid.

A while ago I decided to start using a email relay/API service to handle sending email from my websites. Things like new account, password reset, and webform response emails. I'm pretty terrible at dealing with mail on my servers and I could see I was getting a lot of spam through my VPS. So I decided to pull the plug on sending email from my web server and use Mandrill for that task. It was great, there were good API client modules and plugins for my CMSs and an SMTP option for those systems that didn't support the API.

But, on February 24th I received an email from Mandrill stating "significant changes" were coming...

Why we're making this change

The MailChimp team built Mandrill in 2012 as a transactional email tool. Mandrill has always been under the MailChimp umbrella, but it has functioned as a completely separate product. Mandrill is now becoming an optional add-on to paid MailChimp accounts. This is a strategic change we're making to close the gap between the two products and focus on the MailChimp marketing platform. MailChimp is designed for marketing, and Mandrill is designed for transactional messages. Each is powerful on its own, and offering Mandrill as an add-on makes MailChimp even more powerful for our small business and e-commerce customers. Our CEO and cofounder Ben Chestnut wrote more about the changes on the MailChimp blog.

Well that stinks. I've been on the free 12,000 email/mo plan, because my sites only send a few thousand messages a month (if that). I knew the free ride would end eventually and I'd have to shell out a few bucks a month for the service. I'm a firm believer in paying for the things you use. And if a company wants to provide a free tier that meets my needs, then awesome! That encourages me to steer more people their way.

So I needed to see how this was going to break down in pricing to stay with MailChimp/Mandrill for my low message traffic.

The new cost of Mandrill

So the first thing the email tells me is that I need to have a MailChimp account to continue using Mandril. Ok what's the cheapest version?

Hmm... $10/mo. I mean, I get that there are a lot of features you get for $10. But I'm not sending newsletters, using templates, nor do I care about click tracking, etc. All I need is the API to send transactional emails from my websites. There's an option for pay-as-you-go, but that type of account doesn't let you use Mandrill. But let's dig a little deeper. There's a bullet I missed in the email I received.

Wait, what?!? So now I have to buy a block of Mandrill credits each month on top of the $10 MailChip account, and they start at $20? That puts the minimum cost (of doing what I was doing for free) at $30 per month. For a couple thousand transactional email per month? Honestly, I would be happy to pay $5/mo for the free tier. With a change in cost that big, it really makes me think that MailChimp really wants to get rid of app and web developers.

I started looking for a new service with the same basic features as Mandrill:

I found Mailgun first. This is a service geared toward developers with the first 10,000 emails/mo free. Pricing is very straightforward... 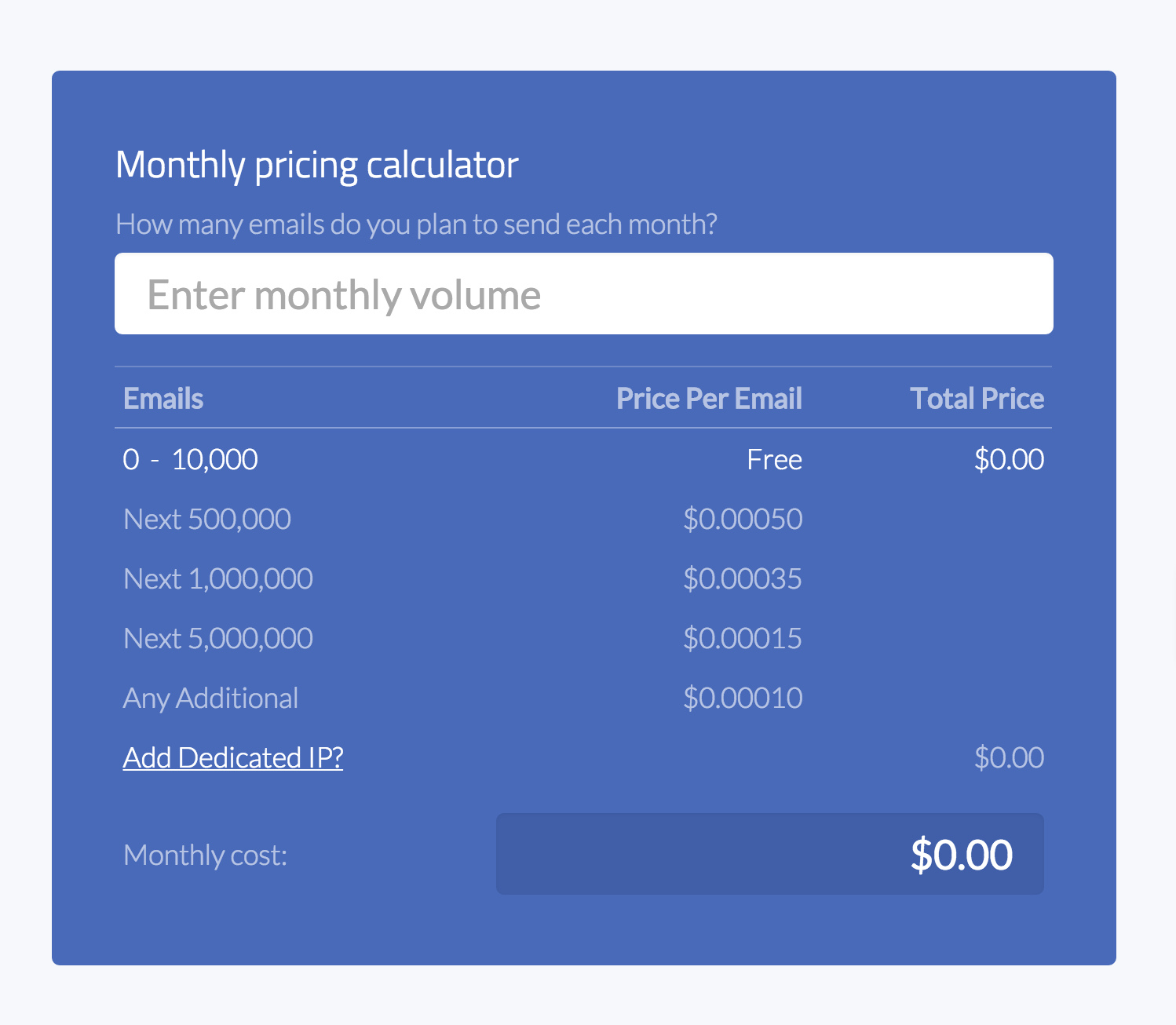 This would put 20,000 messages per month at $5. Now that's what I'm talking about! This is clearly a viable replacement.

I was pretty sure I was going to go with Mailgun, but then I heard about Sendgrid on the Code & Cast Podcast. They spoke very highly about it, so I checked it out. 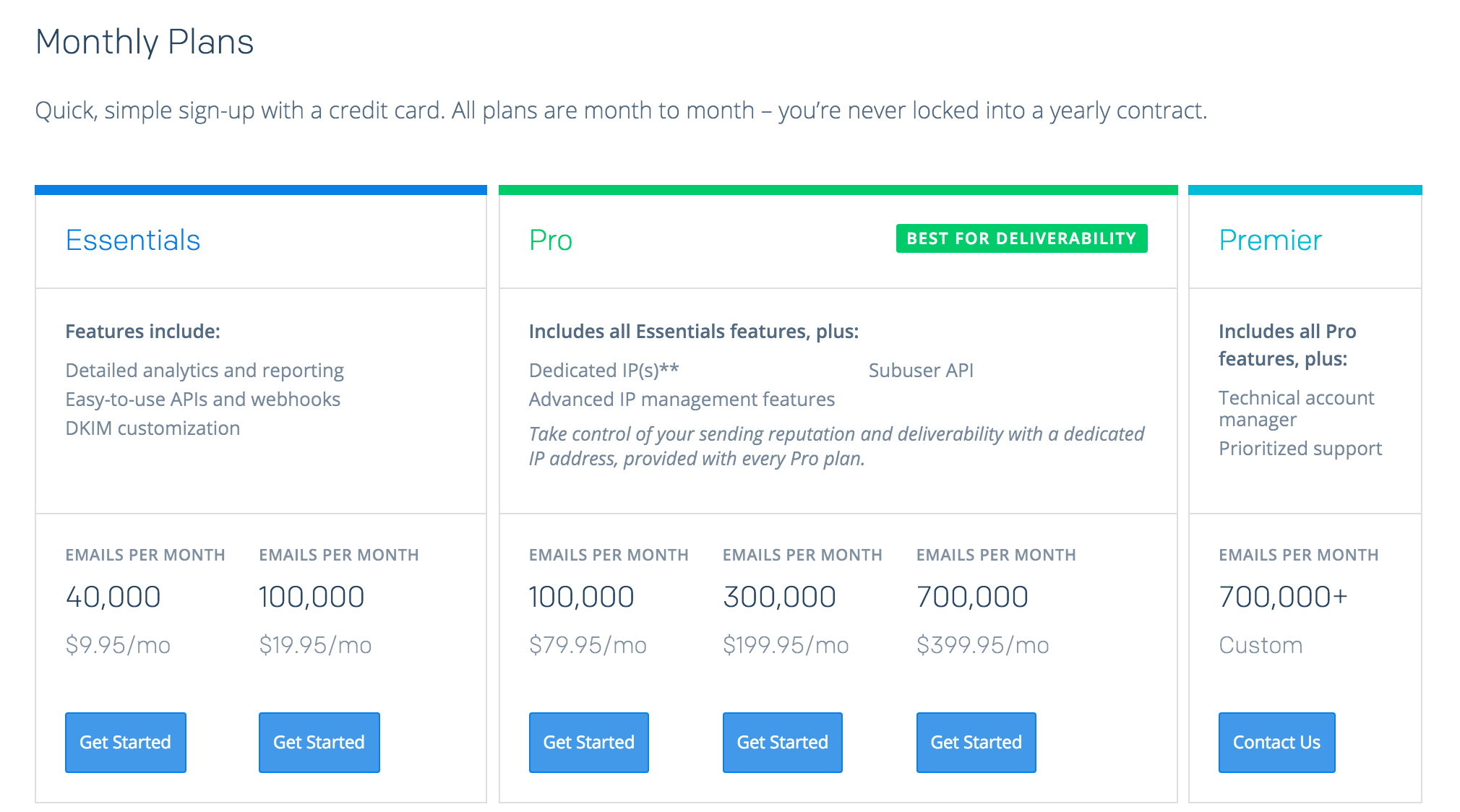 This seems pretty on par with Mailgun's rates, just not as granular. If you go 1 message over you're paying for all of the next level up. But if you scroll down the page... 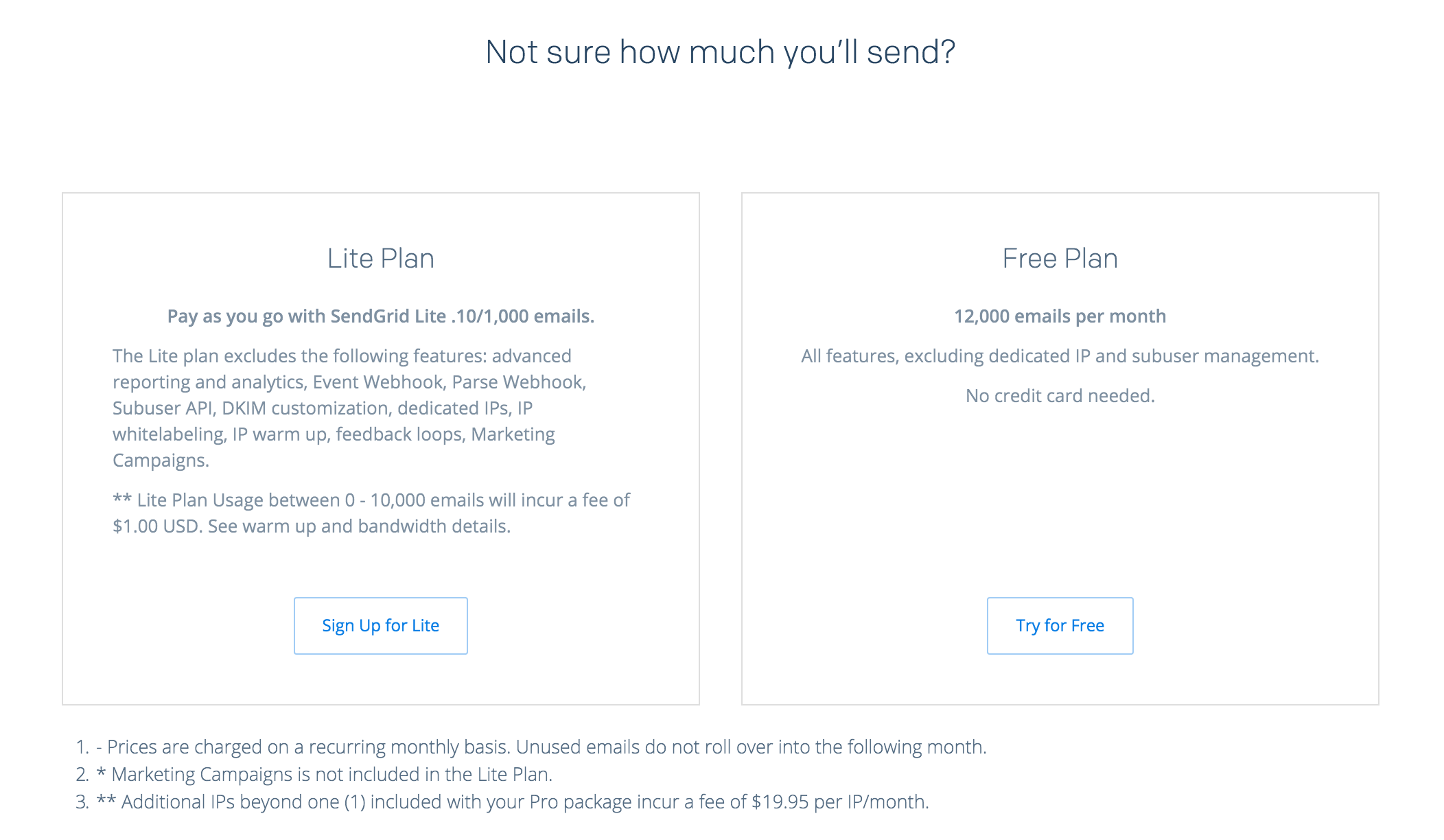 Ah ha! A free and pay-as-you-go plan. What I like about the Lite Plan is that it strips out the stuff I really don't need and just costs $0.10 for every 1,000 messages. Now, I'll start with the free plan since I'm not going to go over 12,000, but it's great to know that there is the Lite Plan for if I start sending more messages.

Thanks to Mike Hillyer for tweeting me another alternative: SparkPost.

@andrewkoebbe another option is @SparkPost with a 100K free tier.

Let's look at their tier levels... 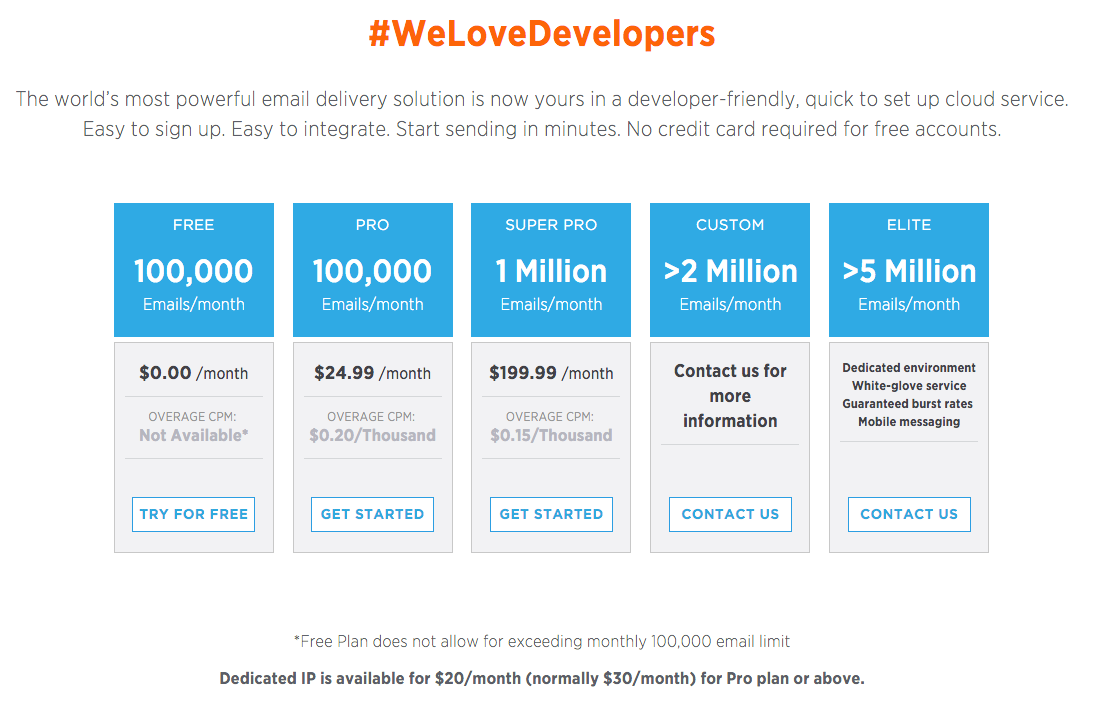 SparkPost offers 100,000 messages in their free tier, which should be very tempting for those in that range. If you go with the first pay tier, you can go over your limit for $0.20/1,000 messages over. That's also appealing in case you spike and don't want to have to pay for the next full level up. There are also Wordpress plugin and Drupal (development release) module for SpartPost. Make sure to include them in your alternative search.

All three alteratives meet all of my requirements. So if you are needing an escape from the Mandrill fiasco, these are great options. I'm giving Sendgrid a shot first, based on recommendations. But I'll easily switch to Mailgun or Sparkpost if it doesn't work out.

Update: I just found this reddit thread about the topic. These and other alternatives are discussed there.

Leave your experiences with these alternatives in the comments. I'd love to hear about them.